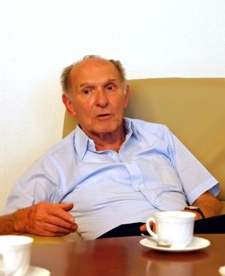 In the early morning of September 1 of this year, Holocaust survivor Olaf Strassmann died in a hospital in Kfar Saba (Israel). Olaf Strassmann was born in 1932 in a factory apartment of the Rositz sugar refinery in Zechau-Leesen as the son of the businessman Philipp Strassmann and his wife Marie. In 1934 the family moved to Altenburg. In 1938 the father was expelled from Germany without warning and murdered near Stryj in what is now Ukraine in 1941. Olaf Strassmann could no longer attend a state school in Altenburg in 1938 and was taught at a Jewish school in Leipzig. As the way to school was too difficult for the six-year-old Olaf, he was placed in the Jewish children's home in Leipzig, where he stayed until 1941. The mother was sentenced to prison in 1943 for allegedly “subversion of national defense”, and Olaf and his younger brother Joachim were taken to the Jewish Hospital in Berlin where there was an orphanage.

In 1944 the brothers were deported to the Theresienstadt ghetto. Of the 54 people deported to Theresienstadt, just 17 were alive on May 10, 1945 - the day the ghetto was liberated. The two Strassmann brothers were among the living, which was not something that could be taken for granted. The two brothers were on a deportation list to Auschwitz and would therefore have been doomed to certain death. At the last moment, the deportation could be prevented because her mother had no Jewish roots. In June 1945 the brothers returned to their mother, who had been released from prison in 1944. They stayed in Altenburg for a short time, then moved to Rositz. The mother had got the shop and apartment back. For the first time since 1941, Olaf Strassmann went to school again - but he insisted on not going to fourth grade, as suggested by the headmaster, but rather the eighth grade, after all he was already 13 years old. So it was.

In 1948 Olaf Strassmann moved to his siblings, who emigrated to Erez Israel in 1939, and so he traveled to Israel with a youth group. He came to Kibbutz Na’an, where he met his future wife Ziona around 1951. Both married in 1955. The happy marriage lasted until the unexpected and never completely overcome death of the wife in 2012. The couple raised three daughters. Until his retirement in 1997, Olaf Strassmann worked for the Israeli airline El Al for over 30 years. Olaf Strassmann never forgot his homeland and was closely connected to it. As soon as the opportunity arose to come to Altenburg, he used it - also thanks to the kind support of Dr. Christa Grimm, who was a close confidante of Olaf Strassmann until the end. With a few exceptions, Olaf Strassmann returned to Altenburg every year and always had a full schedule on his “vacation trip”. Because it was particularly important to him to tell his life story, especially to young people. Like brother Ingolf, Olaf Strassmann became an important contemporary witness. He was also an important contemporary witness because he had special access to young people, told the horrors of the Nazi era in a well-dosed manner and repeatedly loosened up his lecture with cheerful anecdotes from his life. In spite of the cruel things that happened to Olaf Strassmann, hatred, resentment or accusations did not determine his stories, he was concerned with the unifying, reconciling element. His numerous Altenburg friends admired and valued precisely this quality. Whether almost on a regular basis in the Christian Spalatin Secondary School, with whose director a friendly relationship quickly developed, whether on project days in other schools, in discussions with him as a contemporary witness or interviews: Olaf Strassmann never got tired of telling his story. Olaf Strassmann was a special person, particularly warm-hearted, friendly and blessed with a strong pinch of fine humor.

Olaf Strassmann will be missing: as a friend, as a conversation partner, as a contemporary witness. As part of an interview for his biography, which should be completed during a planned visit by Olaf Strassmann this year, he gave the following answer to the question of what he would like to give the readers on the way: “The most important thing in life is getting up again immediately when life knocks you down. It's not always easy, sometimes seemingly impossible, but you have to try. If my mother, Joachim or I had given up our hope of better times at one point in the ghetto or in prison, we would have been lost. It always goes on somehow”.