"...beaten barefoot with a rubber truncheon and chased like a dog to the police prison." 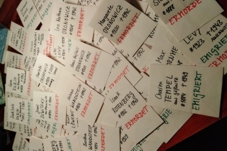 Today people all over the world are remembering the pogrom night of 1938. This staged "popular anger" which terrified countless people throughout the German Reich, which drove not a few to suicide, which caused arrest, humiliation and mistreatment and damaging or destroying of Jewish shops and places of worship also made it finally clear to the Jews in the German Empire, who had still hoped that the National Socialist rule would be a temporary phenomenon, that they could no longer be sure of their health, even of their life. The destruction of property, the insulting, mistreating or spitting on defenseless victims or the mass arrest of Jews - in short, the unbridled hatred of Jewish neighbors - spread throughout Germany, from large cities to many sleepy little villages.

Even for the residents of the Altenburg County, these terrible scenes did not take place anywhere in Berlin or Leipzig: On their doorstep, in Altenburg, Meuselwitz, Rositz and Gößnitz, SA troops roamed the streets and spread fear and horror. There were few expressions of displeasure, and there were hardly any loud ones. Still, there was some kind of comfort, support and protection for Jewish neighbors or friends. In the meantime, the events of the pogrom night of 1938, which were essentially limited to the early morning hours of November 10th in the Altenburg County, have been reconstructed quite well. Few records and personal statements about the pogroms have survived. The quote in the title of this article comes from Markus Hittmann's description of his arrest. 28 Jewish residents of Altenburger Land, including the only 15-year-old Gerhard Kohn and the already 77-year-old Sally Bucky, were brutally pulled from their apartments and transferred to "protective custody". 21 male Jews were arrested in Altenburg, six people - including the only woman Rosa Sternberg - in Meuselwitz and Chaim Tempel in Gößnitz. On November 11, 1938, the five arrested men from Meuselwitz were protracted to the Buchenwald concentration camp, the following day 12 from Altenburg and 1 person from Gößnitz. The internees were in "protective custody" for different lengths of time - the first Jew from the Altenburg County was able to leave the concentration camp on November 17, 1938, the last only on February 7, 1939.

Even if the corona pandemic had to have an impact on this year's pogrom commemoration, it was not allowed to fall victim to the pandemic. And so there is no event on site in Altenburg, but leading representatives from the district and town as well as the representatives of the ecumenical working group have clearly positioned themselves in a declaration on the day and the societies Kommunalpolitischer Ring Altenburger Land and Kreisjugendring Altenburger Land have initiated a light-bag -Action so that an honorable commemoration will take place in Altenburg County even in the demanding year 2020. In this context, it is gratifying that numerous people from Altenburg County have already announced their participation in the symbolic campaign and that "stumbling block godparents" have cleaned the brass memorial plaques for the day of remembrance.

In addition to all the Jewish families in the Altenburg County who lived here in autumn 1938, we also pay special tribute to the 28 people arrested on the night of the pogrom:

b) deported to the Buchenwald concentration camp on November 12, 1938:

b) deported to the Buchenwald concentration camp on November 11, 1938: